The ability to divide one's existence into multiple entities. Sub-power of Unity Force Manipulation. Opposite to Culmination. Not to be confused with Aspect Separation.

Coyote Starrk and Lilynette Gingerbuck (Bleach) were once the same being, who split itself into two. Though neither of them can remember which one was the original.

Katen Kyōkotsu (Bleach) is Shunsui Kyōraku's Zanpakutō Spirit, the younger half (Kyōkotsu) being the result of the older half (Katen) having split herself originally in order to hide Nanao Ise's Zanpakutō. 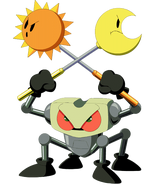 Slice 'n Splice (Kirby: Right Back at Ya!) can split anyone or anything into two entities of opposite gender.
Add a photo to this gallery
Retrieved from "https://powerlisting.fandom.com/wiki/Division?oldid=1657206"
Community content is available under CC-BY-SA unless otherwise noted.