Vali Lucifer (High School DxD) can use his sacred gear, Divine Dividing, to halve the parameters of others abilities.

Reduces the power or parameter.

The power to reduce the power or parameters of one or more targets. Sub-power of Enchantment. Opposite to Upgrading. Not to be confused with Power Negation.

User can reduce the strength, speed, defense and magical or special power and resistance of a target.

The Rock Smash used by this Haxorus (Pokemon) not only causes damage, but reduces the defensive power of the foe 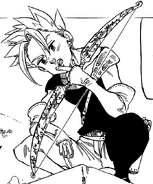 Arden (Nanatsu no Taizai) can use his power Vain to increase the magical burden of an opponent's abilities with the effect can be applied multiple times, preventing powers which use a significant amount of magic from activating.
Add a photo to this gallery
Retrieved from "https://powerlisting.fandom.com/wiki/Downgrading?oldid=1580988"
Community content is available under CC-BY-SA unless otherwise noted.