The users are dragons who have been empowered to be given brand new other powers in addition to their coexisting physiology power sets through the use of mystical and/or superpowered means. In regards to having powers via genetic engineering, birth, evolution, alchemy. Scientific enhancements, training to gain superpowers and magic, and having bestowed powers from supernatural and/or scientific beings. Moreover, there can also be some instances of Superdragons within sub-races. 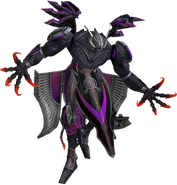 Bahamut (Final Fantasy XIII)
Add a photo to this gallery
Retrieved from "https://powerlisting.fandom.com/wiki/Draco_Magi_Superior_Physiology?oldid=1580137"
Community content is available under CC-BY-SA unless otherwise noted.