Chrom (Fire Emblem Awakening) wields the Falchion, a powerful draconic weapon forged from the fang of the Divine Dragon Naga.

Create bladed weapons out of the draconic powers.

The power to create bladed weapons out of draconic energy/power. Variation of Blade Construction and Draconic Weaponry.

User can create bladed weapons, including daggers, swords, etc., from the parts of a dragon, or draconic power.

The Dragon Knights (Dark Souls II) are a syndicate of warriors that wield swords forged from the tail of Black Dragon Kalameet.

Due to his fusee, WarGreymon being the strongest dragon warrior Digimon, Omnimon's (Digimon) Transcendent Sword possesses his draconic power. 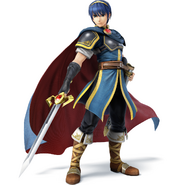 Marth (Fire Emblem series) is one of the wielders of the Falchion, which is highly effective against dragons. 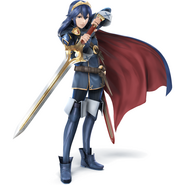 Lucina (Fire Emblem series) is one of the weilders of Falchion, which is highly effective against dragons.

Tōshū (InuYasha) wielding the Dakki, a sword crafted from a dragon-demon's scale, which can drain demonic life energy.

After breaking the yōkai sword Dakki, Inuyasha's (InuYasha) Tessaiga became the Dragon-Scaled Tessaiga, which allows him to drain demonic energy with each slash.

Ryu Hayabusa (Ninja Gaiden series) possesses the Dragon Sword, a weapon carved from the fangs of one of the Divine Dragon Deities and can be infused with the power of the Eye of the Dragon. The sword can only be wielded by the strongest and spiritually pure of mankind.

When he raided the Hayabusa Village, Doku (Ninja Gaiden series) obtained the Dark Dragon Blade, a powerful blade forged from the bones of the Dark Dragon. The blade is able to gain power from each killing and gather the hatred and evil of mankind as power for the wielder, turing them into the Devil Incarnate.

After aquiring the Dark Dragon Blade, Murai (Ninja Gaiden) was turned into the Devil Incarnate, gaining incredible speed, strength, and became able to posses the power of the Dark Dragon.
Add a photo to this gallery
Retrieved from "https://powerlisting.fandom.com/wiki/Draconic_Blade_Construction?oldid=1587583"
Community content is available under CC-BY-SA unless otherwise noted.