The user can create, shape, absorb or manipulate draconic energy, which can be described as spiritual energy that constitutes the life-force that flows within all dragons and through multiple known dragon worlds. Also can be used to create and manipulate the elements.

Dragoons (The Legend of Dragoon) wield the spirits of Dragons to create armor and use magic. 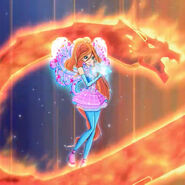 Due to their dragon soul, the Dragonborn (The Elder Scrolls) has an instinctive mastery of the Thu'um, the powerful magic used by the Dragons.

Overwatch Animated Short - “Dragons”
Add a photo to this gallery
Retrieved from "https://powerlisting.fandom.com/wiki/Draconic_Energy_Manipulation?oldid=1720216"
Community content is available under CC-BY-SA unless otherwise noted.