Have a dragon arm

The power to have an arm of a dragon. Variation of Dragon Physiology.

Tōma Kamijō's (A Certain Magical Index) right arm becomes a dragon in order to stop Misaka from breaking down.

Due to having a dragon arm, Issei Hyoudou (High School DxD) can touch holy items like crosses without harm.

Sabo (One Piece) comparing his fingers as dragon claws, rending arrogance, while crushing a giant's weapon and skull with ease. 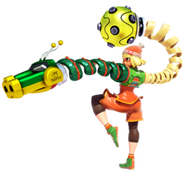 When Min Min (ARMS) fully charges her ARMS, her left arm assumes the strength and appearance of a dragon.
Add a photo to this gallery
Retrieved from "https://powerlisting.fandom.com/wiki/Dragon_Arm?oldid=1512798"
Community content is available under CC-BY-SA unless otherwise noted.