Create armor from a dragon.

The ability to create armor around the user's body from a dragon. Sub-power of Draconic Constructs. Variation of Entity Exoskeleton.

The user is able to form dragon armor or craft it. Most users who are able to generate it have either a Dragon Physiology or a Dragon Soul. To craft dragon armor naturally you would first need to slay a dragon and then have the required skill to make an armor set from the bones or hide of this mythical beast. 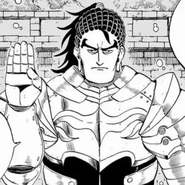 ... and merged with Tatsumi's body as Tyrant's vessel after evolution, transforming him into a humanoid dragon. 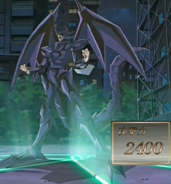 Katsuya Jonouchi/Joey Wheeler (Yu-Gi-Oh!) wearing the Lord of the Red armor, allowing him to personally fight in a duel and incinerate all other monsters on the field.

The Dragon Knights (Dark Souls II) are a syndicate of warriors that wear armor forged from the scales of Black Dragon Kalameet.

Hiccup (How to Train Your Dragons) created dragon scale armor for both him and his friends to protect their bodies from fire and have his latest flightsuit features. Because Hiccup's is made from Toothless's scales, he can survive being electrocuted to death and go on cloak mode with Toothless.
Community content is available under CC-BY-SA unless otherwise noted.
Advertisement