Billy and Jimmy (Double Dragon) wield the power of the dragon fire.

The power to manipulate draconic power. Variation of Force Manipulation.

The user of this power possesses and is able to use strong draconic power. This ability not only grants the user great strength, abilities, and control over numerous variations of draconic energies, but also allows them to overwhelm weaker dragon as well as rival that of powerful draconian entities.

User has control of anything that is symbolized as draconian and connected to dragons and draconic like being. They are able to manipulate sacred objects and relics that are connected to dragons and/or draconian power. With this, the user is completely considered worthy of draconic respect, allowing them to achieve feats that are impossible to be reached by normal standards. 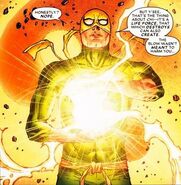