The power to use dragon magic. Sub-power of Dragon Force Manipulation. Form of Magic. Variation of Mythic Magic.

The user is capable of performing dragon-related magical feats, often either taught by a dragon, siphoning magic from a dragon, being magically linked with a dragon, or being a dragon. But it truly depicts magic that is exerted by dragons, since most dragons are described as magical creatures to their very bones, the source of their magic is unknown. The user has the ability to wield this form of magic to cast spells and other magical styles.

The Dragon Slayers (Fairy Tail) are people who, either by learned from Dragons or have a Dragon Lacrima implanted into their bodies, use Dragon Slayer Magic.

Dragons (Spyro the Dragon) are inherently magical. When the Sorceress banished them from the Forgotten Realms, all of the magic in them slowly began to wither and die, only returning with the dragons.

Maleficent (Once Upon a Time) is a powerful sorceress adept at dragon-based magic, being able to expel and dispel dragon's fire so powerful it could burn for all eternity.

Lilith Page/Lily (Once Upon a Time) is shown to possess the same sort of abilities as her mother, being able to turn into a dragon on her first day in Storybrooke.

Hanzo (Overwatch) holds access to ancient magic passed down in the Shimada Clan magic that is shared with his brother Genji.

Dragons (Skylanders) possess powerful magic that even makes them immune to mind control.

Acnologia (Fairy Tail) was one of the first Dragon Slayers and the most powerful of them all, with such absolute magic prowess that he is almost invincible.

The Dark Dragon (American Dragon: Jake Long) is an powerful evil dragon with even greater dragon magic than the rest of his kind. One of his common use of it was summoning shadow creatures called Shade Demons to do his bidding. 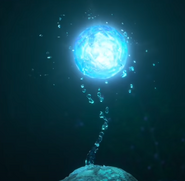