"But there is one they fear. In their tongue, he is Dovahkiin - Dragonborn!"
― The Elder Scrolls V: Skyrim
"He is a man who came from Wano Country in the New World!!! Believe it or not, a long time ago he was known as a legendary samurai who killed a dragon!!! And his story is still passed down to this day!!!"
― Dr. Hogback (One Piece) explaining Ryuma's origins to Nami, Usopp, and Ton Tony Chopper.
The power to kill dragons. Variation of Supernatural Hunter Physiology. 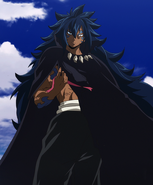 Acnologia (Fairy Tail) is an extremely ruthless Dragon Slayer, having slaughtered countless Dragons to satisfy his thirst for revenge
Add a photo to this gallery
Retrieved from "https://powerlisting.fandom.com/wiki/Dragon_Slayer?oldid=1343491"
Community content is available under CC-BY-SA unless otherwise noted.