Have the soul of a dragon.

"You have the heart of a chief and the soul of a Dragon."
― Valka, How to Train Your Dragon 2

"Skyrim legend tells of a hero known as the Dragonborn, a warrior with the body of a mortal and soul of a dragon, whose destiny it is to destroy the evil dragon Alduin."
― The Elder Scrolls V: Skyrim

The power to have a soul of a dragon. Variation of Other Soul.

User has a soul of a dragon, allowing them to use draconic energy and morph into a dragon, or have a dragon arm. User has the draconic essence in their soul to access an immense level of power like creating wings of energy or exhaling elements. User also gains a large amount of strength.

The Dragonborn (The Elder Scrolls) is a mortal with a soul of a Dragon, and has the unique ability to learn the Shouts of dragons by absorbing the soul of any dragon they kill. 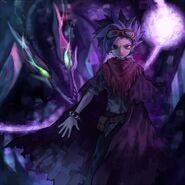 Genshirou Saji's (Highschool DxD) four Vritra Sacred Gears each possess the ability/soul of the Prison Dragon, Vritra.
Add a photo to this gallery
Retrieved from "https://powerlisting.fandom.com/wiki/Dragon_Soul?oldid=1349311"
Community content is available under CC-BY-SA unless otherwise noted.