Use the traits of Dragon Turtles.

User with this ability either is or can transform into a Dragon Turtle, a legendary Chinese creature that combines two of the four celestial animals of Chinese mythology: the body of a turtle with a dragonlike head. It is promoted as a positive ornament in Feng Shui, symbolizing courage, determination, fertility, longevity, power, success, and support.

In other media, the dragon turtle is depicted as being a much more fearsome and ferocious creature, rather than a peaceful entity, with aquatic variants being capable of capsizing the largest of ships. Depending on the source material, some of these dragon turtles can either sport powerful fire or water-based abilities, or have a combination thereof.

Depending on species, dragon turtles are capable of adapting on land, in sea or in both. 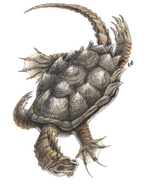 A dragon turtle (Advanced Dungeons & Dragons) attempting a underwater attack on a ship.

A dragon turtle (Advanced Dungeons & Dragons) showcasing its mighty presence to a ship, readying for a attack. 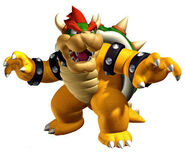 Bowser (Super Mario Bros. series) is commonly recognized as a dragon turtle with the ability to breathe fire.

A Dragon Turtle Mount (World of Warcraft: Mists of Pandaria) found in Pandaria.

Another species of dragon turtle, the Giant Dragon Turtle (World of Warcraft: Mists of Pandaria) is another variant found within Pandaria.
Add a photo to this gallery
Retrieved from "https://powerlisting.fandom.com/wiki/Dragon_Turtle_Physiology?oldid=1422368"
Community content is available under CC-BY-SA unless otherwise noted.