Common writers find the concept of having a woman being coupled with a mindless beast rather disturbing; to accommodate for this, the writers will often augment the dragon's intellect a bit to have the dragonborn be comparable to a Demigod. An also common trate among dragonborns (particularly in Dungeons and Dragons) is that they tend look more dragonoid than humanoid; pretty much a dragon with the shape of a human being. If a dragonborn is to be treated like a demigod, then the dragonborn will gain the specific, and a weaker extent of, powers and weaknesses in relation to the dragon he/she is related to. 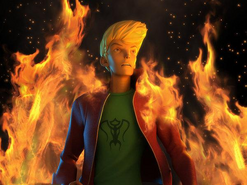