The ability to use the abilities of a Dragonborn. Variation of Dragon Physiology and Hybrid Physiology. Not to be confused with Dragonman Physiology.

User is a humanoid with physical traits and/or abilities similar to those of dragons.

Jake Long (American Dragon) was descended from a human father and a dragon mother.

Nina (Breath of fire 2) has a lost brood heritage from her ancestor, but is unable to turn into a dragon. 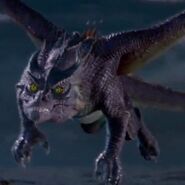 Mal (Descendants 2) born as the daughter of Maleficent she inherited the ability to transform into a dragon like her mother
Add a photo to this gallery
Retrieved from "https://powerlisting.fandom.com/wiki/Dragonborn_Physiology?oldid=1047444"
Community content is available under CC-BY-SA unless otherwise noted.