Use the traits of draugr.

The power to use the abilities of draugr. Variation of Undead Physiology.

User with this ability either is or can transform into a draugr, an undead creature from Norse mythology. They are undead Vikings that retain some semblance of intelligence and delight in the suffering that they cause. Physically they are usually relatively uncorrupted, if either very pale or "corpse-black" and larger and heavier than when they were alive: Thorolf of Eyrbyggja Saga was "uncorrupted, and with an ugly look about him... swollen to the size of an ox," and his body was so heavy that it could not be raised without levers. Draugar live in the graves of the dead, with a draugr being the animated body of the dead. As the graves of important men often contained a good amount of wealth, the draugr jealously guards his treasures even after death.

Draugar are noted for having numerous magical abilities, such as shape-shifting, controlling the weather, and seeing into the future. Among the creatures that a draugr may turn into are a seal, a great flayed bull, a grey horse with a broken back but no ears or tail, and a cat that would sit upon a sleeper's chest and grow steadily heavier until the victim suffocated.

Draugar are extremely powerful undead and have little to no weaknesses, in legends the hero would often have to literally wrestle the draugr back to their grave, thereby defeating them, since weapons would do no good.

The creation of a draugr is not exactly clear, but in the Eyrbyggja saga, a shepherd is killed by a draugr and rises the next night as one himself. The draugr are also often known to haunt their living family.

Older texts divide the draugr into two types: the land-draugr described above and the sea-draugr/"draugen". Draugen were people who drowned at sea and were composed entirely of seaweed. Some have described them as being headless fisherman sailing half a boat or a living corpse.

See Also: Our Wights Are Different.

Draugar (God of War (2018)) are undead warriors that died in battle but refused the Valkyries' call to Valhalla, returning to Midgard as husks of their former selves.

The Draug (The Secret World) are a undead fusion of human and sea life that dwell deep in the Atlantic, ensnaring all who come near. 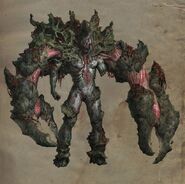 The Draug Behemoth (The Secret World) is the most physically powerful variant of Draug.

Draugr (Skyrim) are undead Nords that haunt Skyrim's crypts and catacombs, attacking any who intrude. 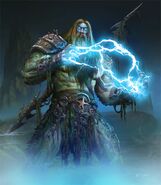 The kvaldir (World of Warcraft) are cursed spirits that roam the seas raiding ships and coastal settlements.

King of the Skull Servants (Yu-Gi-Oh!)

A draugr attacking a pair of warriors in his enlarged form.
Add a photo to this gallery