The power to release/use dreams to various attacks. Sub-power of Dream Manipulation. Variation of Mental Attacks.

The use can release/use dreams in combat to various attacks. 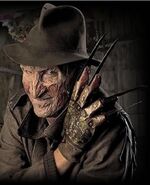 Freddy Krueger (A Nightmare on Elm Street) is well-known for attacking and killing people in their dreams.
Add a photo to this gallery
Retrieved from "https://powerlisting.fandom.com/wiki/Dream_Attacks?oldid=1375304"
Community content is available under CC-BY-SA unless otherwise noted.