With the aid of the neo-steroid Venom, Bane (DCAU/DC Comics) is able to enhance his physical abilities, including his strength and healing process, to superhuman levels.

"Imagine if you could be smarter, stronger, healthier. What if you could even have amazing powers, light fires with your mind… That's what Plasmids do for a man."
― Atlas (BioShock)

"Come to the purple light, Meg. Come taste infinity!"
"Don't listen to him, Meg!"
"But he's so talented and he's got so many drugs."
― Prince and Chris and Meg Griffin (Family Guy)

"Evolution has given animals countless abilities we can only dream of. So much power, por favor. All the genetic potential hidden in our DNA just waiting to be released. But with your investment, one day, a pill that lasts forever. Stop wishing. Start doing. Find your power."
― Biggie (Project Power)

The ability to obtain abilities and enhanced traits by ingesting specialized drugs. Sub-power of Drug Manipulation. Variation of Chemical-Based Powers and Powers Via Object.

The user can obtain superpowers by taking special drugs. However, most of the time the powers are either temporary or single-use effects, and the user must continue to take the drugs to maintain their strength. 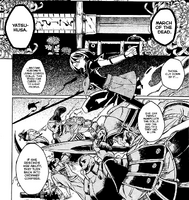 Kurome (Akame Ga Kill) was given drugs to enhance her combat strength as her natural talent was less than that of her sister's, though this caused her life to be dependent on it.

Akame (Akame ga Kill!) once resorted to using drugs to enhance her strength in order to fight with Esdeath. 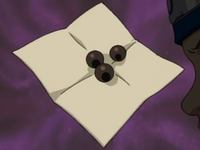 Military Rations Pills (Naruto) are made of powerful stimulants and nutrients that replenish chakra.

The Three Coloured Pills (Naruto) is used by the Akimichi Clan. 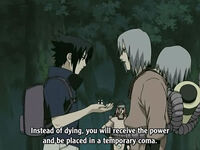 Sakon (Naruto) giving Sasuke a Mind Awakening Pill to have his Cursed Seal of Heaven evolve into Level 2. 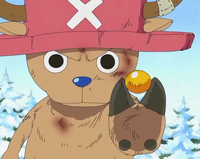 Created by himself, Tony Tony Chopper's (One Piece) Rumble Ball is a type of drug that enhances and empowers his Zoan-type Devil Fruit power, but intake of more than one within six hours has consequential effects. 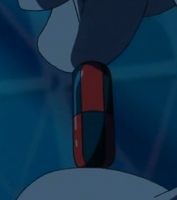 An Energy Steroid (One Piece) temporarily doubles the taker's strength two-folds per pill, exponentially, at the cost of accelerating their age proportionally...

In an attempt to save her children, Vinsmoke Sora (One Piece) took a lethal drug to humanize her sons.

The NKVDemon (DC Comics) possesses enhanced strength and near-immunity to physical pain as a result of experimental steroid usage. 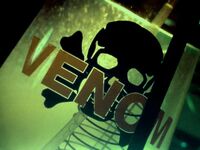 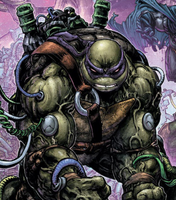 Donatello (Batman/Teenage Mutant Ninja Turtles II) has injected himself with a new strain of Venom created from the TMNT universe's mutagen. 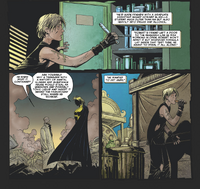 Robert Reynolds/Sentry (Marvel Comics) gained his powers from the Super Soldier Serum, but 1000X more powerful which gave him...

..."the power of a million exploding suns".

Compound V (The Boys) is a drug that grants powers to anyone who is injected with it, (temporally or permanently depending on purity) and is the source of every single superhero and The Boys' powers.

Kobra-Venom (Young Justice), a deadly combination of Bane's Venom drug and the Project Blockbuster formula, is three times as potent as Venom and permanent, inducing extreme growth in muscle mass and hardened skin.

Wolf (Young Justice) is one of many subjects enhanced by Kobra-Venom.

Titan (Batman: Arkham Asylum), a far more potent version of the Venom steroid, only requires a small amount to trigger a transformation but tends to drive the infected insane in the process.

A henchman of the Joker (Batman: Arkham Asylum) enhanced by the Titan formula. 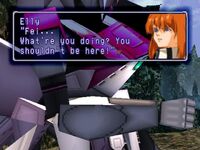 Elhaym "Elly" Van Houten (Xenogears) having enhanced herself with the 'Drive' that gives her Ether boost, but makes her go berserk. 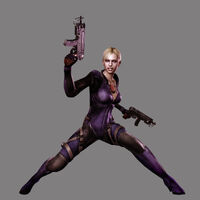 Octane (Apex Legends) can use his Stim to drastically increase his running speed to superhuman levels. 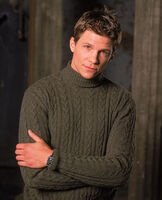 NZT-48 (Limitless), a drug that vastly increases the user's intelligence. However it is highly addictive, and withdrawal is fatal. 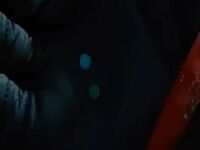 Chems (The Bourne Identity/The Bourne Legacy) are a specialized drug cocktail given to Treadstone assassins and members of Operation Outcome in order to boost their mental and physical abilities. 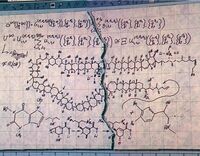 The Genetic Modification Formula (Heroes) is a chemical compound that can grant special powers to the ones who weren't born with them.

CPH4 (Lucy; 2014 film) is a drug that allows the user to slowly access 100% of the user's cerebral capacity

GH.325 (Agents of S.H.I.E.L.D.), created from the blood of a Kree corpse code-named G.H., promotes cellular growth to heal mortal wounds and even resurrect the recently deceased, but also has drastic effects on the psyche of any human who takes it.

The Centipede Serum (Agents of S.H.I.E.L.D.) is a superpower-granting formula created by mixing the Super-Soldier Serum, the Extremis virus, GH.325, metal from salvaged Chitauri technology, and a blood sample from Chan Ho Yin/Scorch, and then exposing the mixture to gamma radiation.

The 'Power' pill (Project Power) is a drug that grants temporary superpowers to those who use them but at the cost of putting their lives at risk in the case of an overdose.

Lena Luthor (Supergirl) made the Harun-El into a supernatural drug that when injected into humans it gives them superpowers that can go toe-to-toe with solar-powered Kryptonians.

Hunter Zolomon/Zoom (The Flash) invented a speed drugs called the Velocity serums that are a series of drugs that can artificially enhance his speed but at a cost cause a cellular degeneration as well as turn his lightning sapphire blue.

Eliza Harmon/Trajectory (Arrowverse) reformat the extracellular matrix for Velocity 9 by reverse-engineering the formula so it could give a non-speedster the abilities of a legitimate one.

How to instantly learn new skills in RPG's - Ability Point 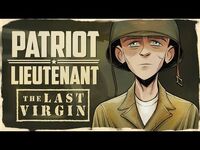