The ability to use the forces of the Celtic Priesthood. Variation of Faith Magic.

The user can utilize druidic magic; a nature-based magical arts from The Celtic Priesthood, a high-ranking class from the ancient Celtic cultures that were said to possess great influence over nature and great sage wisdom.

Note: This power/magic is based on popular culture view about druids, so the historical accuracy isn't the top priority. 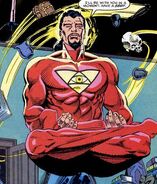 Doctor Druid (Marvel Comics) is a master practitioner of the arcane druidic magic.

Druid (Valkyrie Crusade)
Add a photo to this gallery
Retrieved from "https://powerlisting.fandom.com/wiki/Druidic_Magic?oldid=1660880"
Community content is available under CC-BY-SA unless otherwise noted.