Kirito (Sword Art Online) gained the ability of Dual Blades after being judged for having the fastest reaction time in the game, allowing him to wield his two swords, Dark Repulser and Elucidator.

Use two weapons at once.

"I am the demise who comes from the distant summit, the one who splits earth and sky with two blades."
― Edelweiss (Rakudai Kishi Eiyutan)

"Perhaps you would like to learn something before you die. The use of two blades, one to support the other, can be traced back thousands of years and was common to both of our species. The invention of lightsabers has done nothing to lessen the effectiveness of this strategy—as you are about to learn"
― Boc Aseca to Kyle Katarn (Star Wars Legends)

"Double katana is the only way to play!"
― Leonardo (Teenage Mutant Ninja Turtles 2003)

The ability to use two weapons simultaneously. Sub-power of Weapon Proficiency. Lesser version of Multi-Weapon Wielding.

The user is capable of wielding two different weapons with ease in combat. The weapons in question are normally bladed weaponry and/or firearms, but it can be virtually any melee and/or ranged weapon. Because of this, the user is able to deal twice the damage to their opponent quickly, swiftly, and effectively. They're also able to hold their own against multiple enemies at multiple angles, allowing them to fight and take advantage of wide openings.

However, due to possessing two weapons at the same time, the user often bears poor defensive skills, so this ability requires speed, power, accuracy, and fast reaction time in order to maneuver through and counter their enemies' attacks in order to make up for the lack of defense.

Revy (Black Lagoon) is so skilled using her dual modified Beretta M92 that she goes by the moniker "Two Hands".

Yū Kanda (D.Gray-man) using his Two Illusion Blades to create two impossibly sharp spiritual energy blades, one with the sword and one with the sheathe.

A dual wielder of swords, Saitou Shimaru (Gintama) is well known in Shinsengumi for his excellent swordsmanship.

The basis of his unique Santoryu/Triple Blade Style, Roronoa Zoro (One Piece) is a supreme master of his original Nitoryu/Dual Blade Style...

...demonstrating his outrageous prowess when he sliced apart a train cart of the Puffing Tom with his Nitoryu Iai: Rashomon...

Kaku's (One Piece) mastery of Nitoryu/Dual Blade Style swordsmanship is nearly on par with Zoro's.

Both a master swordsman and axeman, X Drake (One Piece) dual wields a saber and battle axe as his unique fighting style .

Before Zoro, Kozuki Oden (One Piece) was the most powerful master of Nitoryu/Dual Blade Style.

The greatest dual wielder of the Chouga tribe, Yo Tan Wa, the King of Death (Kingdom)... 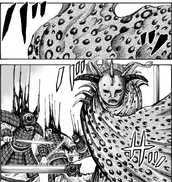 ...can instantly deliver death with a wave of her blades... 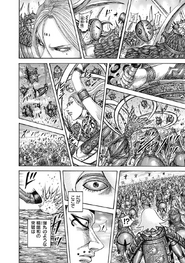 ...decimate entire battalions of mounted horsemen like a speeding bullet...

... and cripple the Eldest brother of the Quanrong and respective dual wielder, Goba with each one of her strikes during their very short duel.

Extremely proficient in the use of his dual swords, Ba Jio (Kingdom) can use swift and powerful, casual attacks against multiple enemies.

...was extremely skilled in the use of his dual swords...

...easily killing enemy soldiers while in the midst of a duel...

...counterattacking both Shin of the Hi Shin Unit and Ou Hon of the Gyoku Hou Unit while dodging their combo attack...

...and target his opponent's limbs with precision.

A capable swordswoman and the strongest warrior of her village, Kaine (Kingdom) posses the rare talent of using two swords in combat.

Goba, the Eldest Brother of the Quanrong (Kingdom)

Tokito (Samurai Deeper Kyo) wielding the Hokuto Shichisei, which splits into dual swords she can wield to great effects.

Kazuma Kuwabara (Yu Yu Hakusho) armed with his Double Spirit Swords, though his lack of swordsmanship training renders this more of a flailing move.

After getting her father's missing Scissor Blade back from Nui Harime, Ryūko Matoi (Kill la Kill) became able to wield both Scissor Blades, allowing her to cut and effectively destroy the otherwise indestructable Life Fibers.

After sword, Bakuzan was broken by her mother, Satsuki Kiryūin (Kill la Kill) wielded it as the reforged Bakuzan Gako and Bakuzan Kōryū, allowing her to cut down and destroy Life Fibers. 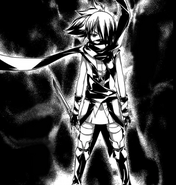 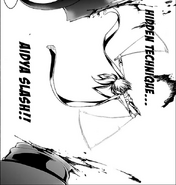 ...and keeps them in Magus Mode, allowing her to use lighting slash technique to behead her opponents.

Siegfried (Highschool DxD) is a master swordsman capable of dual wielding which served as the basis for his Balance Breaker enhanced five sword style.

Hajime Nagumo (Arifureta Sekai Saikyou) is a tremendously skilled master marksman with his dual revolvers Donner and Schlag.
Add a photo to this gallery

Death (Darksiders) wields the shape shifting scythe, The Harvester, allowing to shape the weapon so he can wield two scythes at the same time.

Dante (Devil May Cry) dual wields both firearms and swords with incredible ease and precision.

Diarmuid of the Love Spot or Lancer (Fate/Zero) is an extremely accomplished spearman, capable of skillfully using two spears of different lengths with blinding speed and agility. 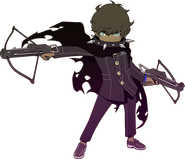 Kratos (God of War) displays proficiency in wielding two weapons at once with great efficiency and power as seen with the Blades of Chaos, Nemesis Whip, Claws of Hades, and Nemean Cestus. 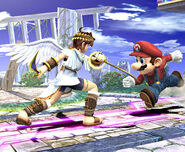 Pit (Kid Icarus) uses a bow that can split into two blades for melee combat. 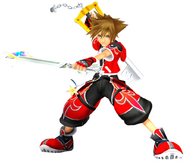 Whenever Sora (Kingdom Hearts) enters one of his Drive Forms, he is able to execute his attacks with two Keyblades. 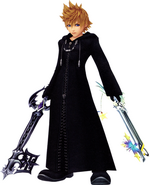 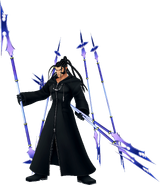 Xaldin (Kingdom Hearts) can wield two-to-six lances at once.

Naked Snake/Big Boss (Metal Gear) assumes the CQC fighting stance; a handgun in one hand and a combat knife in the other. 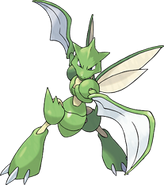 Scyther (Pokemon) has dual blade appendages that it wields with great speed. 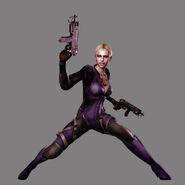 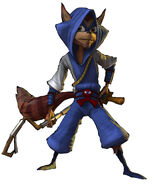 Rioichi Cooper (Sly Cooper series) was skilled with his twin bamboo canes and used them for different methods of attack. 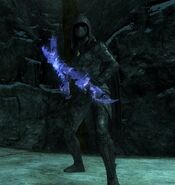 The Last Dragonborn (The Elder Scrolls V: Skyrim) can dual wield any one-handed weapon or spell.

Ganondorf (The Legend of Zelda) wielding dual blades, whether in his Gerudo form or his giant boar form. 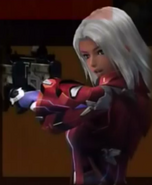 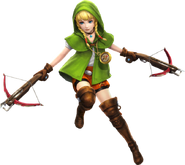 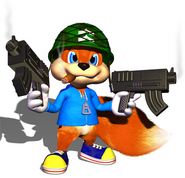 Ryu Hayabusa (Ninja Gaiden) is master in dual wielding swords, able to wield the True Dragon Sword and Blade of the Archfiend with incredible skill and dexterity.

As the most powerful Black Spider Ninja, Genshin (Ninja Gaiden 2) combined swordsmanship and clawmanship into his personal fighting style.
Add a photo to this gallery 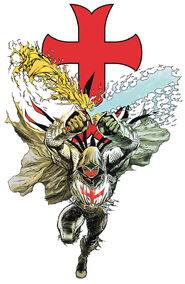 River Tam (Firefly) wielding a hatchet in one hand and a sword in the other.

Leonardo (Teenage Mutant Ninja Turtles) is a highly skilled dual wielder of the katana blades as he quotes "Twin katana are the only way to play!"

Katmandu (Teenage Mutant Ninja Turtles) wields both a sword and a club at once.

Jar'Kai or Niman (Star Wars) was originally a style of swordplay that utilized dual lightsaber blades...

...General Grievous included various elements of Jar'Kai in his style of swordplay... 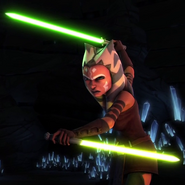 ...Ahsoka Tano is highly skilled in lightsaber combat as well as Jar'Kai...

...Boc Aseca would often separate his modified weapon lightsaber and launch into an awkward, seemingly clumsy, but deadly imitation of his idol's two-bladed Jar'Kai style... 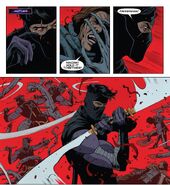 Vampirella (Vampirella) dual wielding swords against a horde murderous of demons.
Add a photo to this gallery

Alice (Resident Evil) can dual wield both melee weapons and firearms with ease.

Darth Maul (Star Wars)
Add a photo to this gallery
Retrieved from "https://powerlisting.fandom.com/wiki/Dual_Wielding?oldid=1445219"
Community content is available under CC-BY-SA unless otherwise noted.