Most if not all of the Hadou and Gudou Gods (Masadaverse) attack directly the soul of their opponent, bypassing physical defense.

"Not so tough now are ya? Are ya?!"
― Scout, whilst taunting his enemies. (Team Fortress 2)

The ability to bypass or negate durability. Sub-power of Absolute Attack.

The user can damage the target regardless of its durability, bypassing or negating durability, even if they lack destructive attack power.

With the microscopic machines known as Mimosa, the Professor (A Certain Magical Index) can disintegrate anyone cell by cell regardless of their durability.

"The One Being Sought" has such insanely amazing Swordsmanship skills that he can cut through anything regardless of its actual durability.

Ulla Euleus Hecmatika (Kami-sama no Inai Nichiyoubi) received a gift from her mother called "Idol of Murder" which can kill anything. 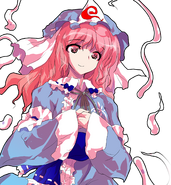 Yuyuko Saigyouji (Touhou Project) has the ability to end the life of any living being, from humans to Youkai. No resistance is permitted against this ability, and there are no exceptions in who it affects.

...and using Radio Knife, enhanced version of amputation to slice through Trebol's sticky defenses.
Add a photo to this gallery
Retrieved from "https://powerlisting.fandom.com/wiki/Durability_Negation?oldid=1512826"
Community content is available under CC-BY-SA unless otherwise noted.