Kendrix Morgan (Power Rangers: Lost Galaxy) about to use her Beta Bow.

The ability to use earth-based abilities by using ranged weapons as conduits. Variation of Elemental Artillery and Earth Weaponry.

The user can either use various ranged weaponry such as slingshots, bows, guns, cannons etc, as a conduit to earth-based powers or impose those effects on ranged weapons to enhance them. 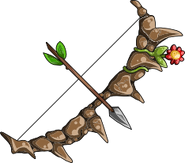 Minerva, Goddess of The Lifestream (Crisis Core: -Final Fantasy VII-) with her earth bow.
Add a photo to this gallery
Retrieved from "https://powerlisting.fandom.com/wiki/Earth_Artillery?oldid=1278961"
Community content is available under CC-BY-SA unless otherwise noted.