Have a body made up of earth or earthen substance.

"Hers was an ability type most often relegated to the supporting role, but [Sanko] had lived long enough to become an exception. She’d used pan-rozum to do more than simply fuse elements together. She’d learned to fuse herself into them, to become an entity of dirt and rock and stone. Integration may not have allowed her to create her own elements, even with pan-rozum, but that was a small price to pay when she could wield almost every element of every type of ground in the world as an extension of her body.
Everything beneath the Rainlords’ feet belonged to the Gargoyle now."
― The Zombie Knight

The power to transform into or have a physical body made up of earth or other earthen substance. Technique of Earth Manipulation. Variation of Elemental Mimicry.

The user is made up of or can transform their body completely into earth, including soil, stone, metal, clay or other earthen substance. A user's transformed form is anatomically identical to their normal form, aside of being made of earth, in which case it contains all to organs and is somewhat vulnerable to attacks. Alternately, the user can transform into homogeneous matter, without any part of their form being more important than the other.

Exact physical abilities the user has depend on which variation they are using: sand, clay and soil are malleable and hard to truly harm; crystal, metal and stone are hard and grant powerful physical attacks but aren't particularly flexible. 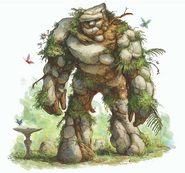 Tessai (Ninja Scroll) possessed this ability which was a deadly combination with his already large physique.

Crocodile (One Piece) using the ability of the Sand Sand Fruit/Suna Suna no Mi to reform his body.

Onix (Pokemon) and other ground-type Pokemon. 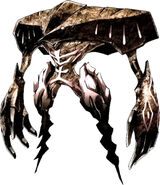 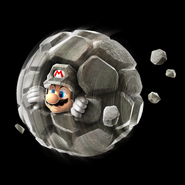 Genbu (Yu Yu Hakusho) assimilating with stone, moving through it undetected.
Add a photo to this gallery
Retrieved from "https://powerlisting.fandom.com/wiki/Earth_Mimicry?oldid=1616726"
Community content is available under CC-BY-SA unless otherwise noted.