The user can create and project needles/spikes of earthly material to impale targets. These spikes can be projected in mid-air or generated from the ground; potentially creating a trail of needles.

Eshros and Shin (Zatch Bell!) can reshape the ground into spikes with their spell Grangarugo. 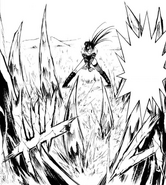 Boboiboy Earthquake (Boboiboy)
Add a photo to this gallery
Retrieved from "https://powerlisting.fandom.com/wiki/Earth_Spike_Projection?oldid=1333733"
Community content is available under CC-BY-SA unless otherwise noted.