Flygon (Pokemon) using Sandstorm to create a tornado of sand.

The ability to generate a spiral/vortex of earth. Sub-power of Earth Attacks. Variation of Elemental Vortex Creation.

The user can generate spirals/vortices composed of earthly materials. The vortex can be projected as a long ranged attack or as a tornado of earth for both offensive and/or defensive purposes.

Crocodile (One Piece) uses his Sables technique to create a vortex of sand. 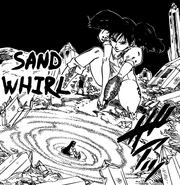 Diane (The Seven Deadly Sins) creating a whirlpool of quicksand.
Add a photo to this gallery
Retrieved from "https://powerlisting.fandom.com/wiki/Earth_Vortex_Creation?oldid=1770968"
Community content is available under CC-BY-SA unless otherwise noted.