Use the traits of echinoderms.

Power to use the abilities of echinoderm. Variation of Animal Imitation and Animal Morphing.

User with this ability either is or can mimic/transform into Echinodermata such as starfish, sea urchins, sand dollars, and sea cucumbers.

Spyke (Splatoon) is a sea urchin, and like a sea urchin, his favorite food is Super Sea Snails, like the one sitting next to him.

Stella (Help! I'm a Fish), a human girl who is turned into a starfish by drinking a potion created by Professor MacKrill. 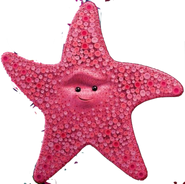 Peach (Finding Nemo)
Add a photo to this gallery
Retrieved from "https://powerlisting.fandom.com/wiki/Echinoderm_Physiology?oldid=1502193"
Community content is available under CC-BY-SA unless otherwise noted.