Fuses physical combat with the ectoplasm

The power to fuse Ectoplasm with physical fighting. Technique of Ectoplasm Manipulation. Variation of Ergokinetic Combat.

The user is able to incorporate ectoplasm into physical combat, allowing for a form of fighting that focuses on bypassing defenses and striking the opponent's soul. 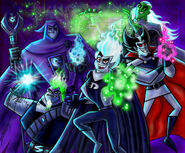 Ghosts (Danny Phantom) are capable of creating objects and weapons as well as increase their physical strength via ectoplasmic energy.
Add a photo to this gallery
Retrieved from "https://powerlisting.fandom.com/wiki/Ectokinetic_Combat?oldid=859990"
Community content is available under CC-BY-SA unless otherwise noted.