Momoshiki Ōtsutsuki (Naruto) transformed Kinshiki into a Cinnabar Elixir, and then by consuming it, transforms into a more powerful form.

Turn anything into edible substances.

"It's jolly, it's loyal, Like drinking your best friend!"
― Lenny, Carl and Barney (The Simpsons)

The user can transform matter and objects, including living beings, into edible substances such as food, candy, medicine, etc.

Fruit Witches (Adventure Time) can turn others into fruits.

When her elemental powers reached its peak, Princess Bubblegum (Adventure Time) was able to turn everyone and everything around her into candy, as well as make them more sweet in behavior.

The Sweet (Cardcaptor Sakura) is able to turn objects into sweets.

Monster Carrot (Dragon Ball) can turn anyone he touches into carrots.

Devil Flanders (The Simpsons) turns Homer's head into a doughnut.

Charlotte Smoothie (One Piece) can squeeze juices out of anything from humans, animals to even a volcano rock.

Streusen (One Piece) can turn any objects into food ingredients. 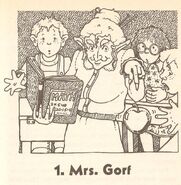 Mrs. Gorf (Wayside School) can turn people into apples.
Add a photo to this gallery
Retrieved from "https://powerlisting.fandom.com/wiki/Edible_Transformation?oldid=1439523"
Community content is available under CC-BY-SA unless otherwise noted.