Kishin Asura (Soul Eater) making use of his own epidermal plasticity.

The ability to have elastic skin. Sub-power of Elasticity and Skin Manipulation.

The user's skin is highly elastic, being able to deform and elongate to an incredible degree, while maintaining natural layer density and textural consistency. 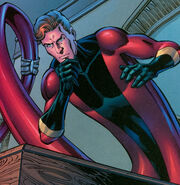 Elongated Man (DC Comics)
Add a photo to this gallery
Retrieved from "https://powerlisting.fandom.com/wiki/Elastic_Skin?oldid=1502238"
Community content is available under CC-BY-SA unless otherwise noted.