The power to use Eldritch Magic, a form of magic that is derived from Eldritch Abominations. Form of Magic. Horror Version of Celestial Magic. Combination of Dark Arts, Divine Magic and Extraterrestrial Magic.

Users can utilize Eldritch Magic, a variation of magic that is usually derived from some sort of Eldritch being, source, or location. What this means ultimately depends on the universe it's used in, but more often than not it's not a good thing. Eldritch Magic practitioners are capable of doing things that can exceed many limitations of Magic usually at the cost of their physical form or their sanity. Eldritch Magic is usually accomplished via communion with eldritch masters. 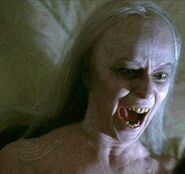 Pious Augustus (Eternal Darkness) was a Roman centurion who was transformed into a liche by an artifact of the Ancients, granting him the ability to cast the eldritch magick of the Ancient he served, as well as Mantorok's. 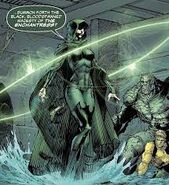 Alastor (Hazbin Hotel) is a powerful overlord of Hell and is a master user of this power.

The Scelesti (Mage: the Awakening) have magical abilities derived from "the Abyss", a realm of unreality that exists between the "Fallen World" and the "Supernal Realm".
Português do Brasil
Community content is available under CC-BY-SA unless otherwise noted.
Advertisement