Wilbur Whateley (The Dunwich Horror) was the half-human son of the eldritch abomination Yog-Sothoth, and as such possessed a portion of his soul and his power.

The user has the soul of an eldritch entity from beyond the known universe, whether because they are descended from an eldritch abomination or born too close to some anomaly leading to some realm outside the multiverse as we understand it. The soul grants them some of the powers of such an entity, being able to use their magic and causing madness and fear in those around them.

Padan Fain (The Wheel of Time) had his soul so corrupted by the Dark One and his merger with Mordeth that upon meeting with the soul-consuming Black Wind known as Machin Shin, he ended up scaring it away from his own eldritch nature. 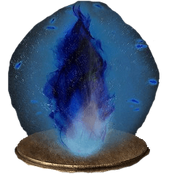 Aldrich (Dark Souls III) possesses a soul alien and different to most other souls, possessing a blue and black, wispy soul as oppossed to the fire-like qualities of regular souls.

Due to having a distorted soul and absorbing both an Evil God and multiple Demon King fragments, Vandalieu's (The Death Mage Who Doesn't Want a Fourth Time) soul has a twisted appearance similar to an Evil God's one.
Add a photo to this gallery
Retrieved from "https://powerlisting.fandom.com/wiki/Eldritch_Soul?oldid=1516807"
Community content is available under CC-BY-SA unless otherwise noted.