The power to manipulate fire with electrical properties. Variation of Elemental Mixture. Combination of Fire Manipulation and Electricity Manipulation.

The user can create, shape and manipulate either electrified fire or both fire and electricity simultaneously. 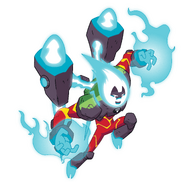 Samael (Darksiders series) can surround himself in both his fire and electricity magic to create an armor of electric-flame that not only enhances his strength, but also his magic.

Hikaru Shidou (Magic Knight Rayearth) has both Fire and Lightning via the spell "ruby lightning".

Kimiko Tohomiko (Xiaolin Showdown) can combine the Eye of Dashi with her element of Fire to create a lightning blast enhanced with intense fire energy.

After merging with Raiden, Liu Kang (Mortal Kombat 11) became the God of Fire and Lightning
Add a photo to this gallery
Retrieved from "https://powerlisting.fandom.com/wiki/Electric-Fire_Manipulation?oldid=1372022"
Community content is available under CC-BY-SA unless otherwise noted.