In his steampunk 1872 armor, Tony Stark of Earth-51920 (Marvel Comics) is armed with an electric prod on the right arm and a flamethrower on its left.

The ability to wield or create weapons with electrical and fire power. Variation of Combined Weaponry and Element Weaponry. Combination of Electricity Weaponry and Fire Weaponry. Not to be confused with Thermal Weaponry.

User can to create or wield weaponry with power over electric-fire, a mixture of electricity and fire that either acts as two separate weapons wielded simultaneously, two different elements in a single weapon, or a manipulation of electricity-based flames in and of themselves. This ability is not only specific to mystic weapons, but also technologically advanced weapons. The power of the weapons depends on what they were created for or what level of electric-fire-based ability they possess. 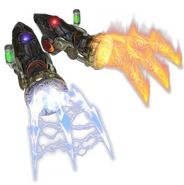 Durga (Bayonetta), a set of clawed gauntlets and greaves that utilize fire and electricity.

As the Masked Lumen, Balder (Bayonetta series) utilizes the Holy Glaive, a weapon that has both fire and electricity among its elements. 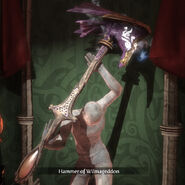 El Jefe (Sly Cooper: Thieves in Time) can use his swords to conduct lightning...

...and project fireballs.
Add a photo to this gallery
Retrieved from "https://powerlisting.fandom.com/wiki/Electric-Fire_Weaponry?oldid=1151389"
Community content is available under CC-BY-SA unless otherwise noted.