Son Gohan (Dragon Ball series), like most ascended Saiyans, can produce an electrical aura around them whenever they transform into a Super Saiyan 2 or higher.

Surround oneself in electricity.

The ability to surround oneself with electricity. Technique of Electricity Manipulation. Variation of Elemental Aura.

The user can release and surround themselves in/with electricity for defensive and/or offensive purposes, possibly becoming almost untouchable and granting them various abilities/attacks. The auras may also give the user enhanced physical capabilities such as speed, strength, and durability.

Yoruichi Shihōin (Bleach) using Shunko to infused herself with a powerful aura of electricity.

Vortex (Danny Phantom) can surround himself with an electric aura.

Static (DCAU) surrounding himself in electric. 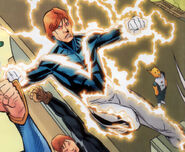 The Flash (DC Comics) surrounded with an electrical aura.

Thanks to his Lightning Dragon Slayer Magic, Laxus Dreyar (Fairy Tail) can surround himself with powerful electrical energy.

Rollermines (Hλlf-Life 2 series) are sphere-shaped robots that possess retractable appendages that cause an electric aura to surround them, in order to deal shocking damage to enemies when they physically assault them, especially if there were a swarm of them.

Killua Zoldyck (Hunter X Hunter) can efficiently change his Nen aura into electricity. As such he developed a special technique - Godspeed, in which he can enhance his speed and reflexes to godly levels. 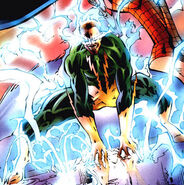 Max Dillon/Electro (Marvel Comics) enveloping himself in an electrical aura.

Noriko Ashida/Surge (Marvel Comics) coating herself in an aura of electricity.

Pikachu (Pokémon) surrounding itself in an electric aura.

Electivire (Pokémon) surrounded in an aura of electricity after its Motor Drive ability is activated.

Pepe (SNK) can surround himself with lightning energy.

Metal Sonic (Sonic the Hedgehog) surrounds himself with an electrical aura that can penetrate virtually any substance using the V. Maximum Overdrive Attack.

Even when he isn't running Hunter Zolomon/Zoom (The Flash) can generate sapphire blue electricity on his body.

Members of the Mink Tribe (One Piece) can all channel electricity through parts of their bodies. Even creating an aura around their body in order to shock anything they touch.

Hattifatteners (Moomin)
Add a photo to this gallery
Retrieved from "https://powerlisting.fandom.com/wiki/Electric_Aura?oldid=1626247"
Community content is available under CC-BY-SA unless otherwise noted.