Whenever his partner, Dufort, casts Zakeruga, Zeno (Zatch Bell!) can fire a concentrated beam of lightning from his hands.

The user can produce and project beams of concentrated electricity, which can shock or cause paralyzation, pierce through almost anything, or create destructive explosions upon impact. Unlike simple electrical blasts, these beams do not flicker, but instead travel in a straight line at high speed; they can also flow like water, allowing them to be guided.

Livewire (DCAU) firing a beam of electricity from her hands.

Achelousaurus (Dinosaur King), one of the Ceratopsidae dinosaurs that can charge up a ball of electricity in their horns, then shoot a bolt of lightning at their opponent.

Piccolo (Dragon Ball) firing a simple electric beam from his antennae to stun his opponents.

As an Offworlder, Tekka (Dragon Ball Fusions) can use Magical Thunder to fire a beam of electricity from his finger. 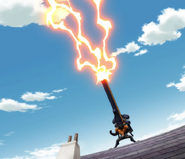 Wall Eehto (Fairy Tail) firing off a powerful electrical beam at his opponent with his Railgun Bombardment.

Kakuzu (Naruto) using Lightning Release: False Darkness to shoot out focused beams of lightning that can easily pierce and slice through rock.

Enel (One Piece) using El Thor to drop a very large beam of electricity onto anyone who speaks against him...

...He can also release it as a powerful stream from his hand.

The Thunderbolt (Quake series) is a powerful weapon that unleashes a beam of electricity at the wielder’s opponents.

Manufactured through the same process as the XL2 Lasergun, the XL4-P 'Ghostbuster' Beam Gun (Serious Sam) is a scientific piece of artillery that emits a beam of concentrated electricity, also making it useful when its wielder is cornered by enemies.
Add a photo to this gallery
Retrieved from "https://powerlisting.fandom.com/wiki/Electrical_Beam_Emission?oldid=1440981"
Community content is available under CC-BY-SA unless otherwise noted.