Jason Voorhees (Friday the 13th) is resurrected after being struck by a bolt of lightning.

The power to be resurrected through electrical-based phenomenons. Variation of Resurrection.

The user can revive themselves and others through electrical phenomena.

Raiden (Mortal Kombat: Legacy) being resurrected after being impaled.

When Tom Turbo (Tom Turbo) gets destroyed, deactivated or dissambled, his boss can resurrect him with a special energy beam. 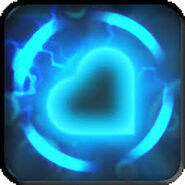 The Spark of Life (Spiral Knights) are used by the knights to revive.

Knight (Spiral Knights) using a Spark of Life to revive.
Add a photo to this gallery
Retrieved from "https://powerlisting.fandom.com/wiki/Electrical_Resurrection?oldid=1502277"
Community content is available under CC-BY-SA unless otherwise noted.