The user can either use various ranged weaponry such as slingshots, bows, guns, cannons etc, as a conduit to electricity or lightning-based powers or impose those effects on ranged weapons to enhance them. 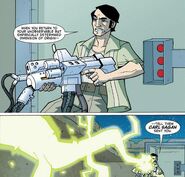 Being the vessel for akuma, Stormy Weather (Miraculous: Tales of Ladybug & Cat Noir) channels her powers, including shooting lightning and creating ice, through her parasol.

The Wave Beam (Metroid) is a weapon used by Samus Aran that could fire electricity. 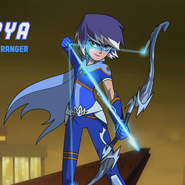 Zarya Moonwolf (Mysticons) can fire lightning-infused arrows capable of stunning her target.
Add a photo to this gallery
Retrieved from "https://powerlisting.fandom.com/wiki/Electricity_Artillery?oldid=1557763"
Community content is available under CC-BY-SA unless otherwise noted.