Sesshōmaru (InuYasha) channeling his yoki into Tōkijin and unleashing it in the form of his Dragon Strike technique.

"Shake off your slumber. The time is at hand. By the judgment of thunder, slay God."
― Elsa (The Sacred Blacksmith)

The ability to release/use electricity to various attacks. Sub-power of Electricity Manipulation. Variation of Elemental Attacks and Energy Attacks. Opposite to Electricity Defense.

The user can release/use electricity to attacks of various shapes and/or intensities, either projected, used as a part of melee attacks, etc. 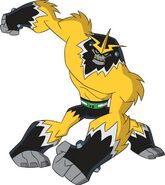 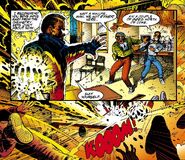 With the ability to project powerful blasts and/or bursts of electromagnetic energy, Virgil Hawkins/Static Shock (Static Shock) can administer it in a range of different attacks...

Cole Macgrath (inFAMOUS) can use attacks such as electricity grenades, blasts and rockets. 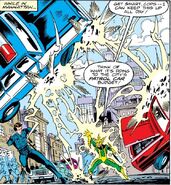 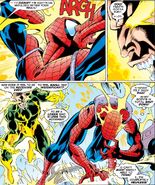 ...and disrupt the human nervous system.

Sasuke Uchiha (Naruto) using Lightning Style/Release: Kirin to drop a gigantic bolt of lightning onto Naruto during their fight.

Charlotte Linlin/Big Mom (One Piece) can summon and use her thundercloud Zeus to create massive amount of lightning for combat.

While in her Sulong form, Carrot (One Piece) uses Electro to electrify multiple enemies.

Raimeiki (Owari no Seraph) is able to release powerful electricity to an extensive range.

Triceratops/Chomp (Dinosaur King) charge up a ball of electricity in its horns, then shoot a bolt of lightning. 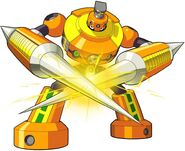 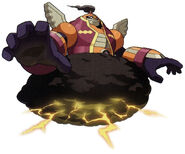 Zatch (Zatch Bell!) is one of the 100 demons fighting to be the next king. He uses powerful lightning spells with Kiyomaro "Kiyo" Takamine acting as his bookkeeper to help him bring them out.

Like his twin brother Zatch, Zeno (Zatch Bell!) also uses lightning spells. However even though their spells are the same, Zeno’s lightning is much more powerful than his brother’s.