The ability to use electricity-related magic. Form of Magic. Variation of Electricity Manipulation and Elemental Magic.

Empowered by his Lord Soul, Gwyn, Lord of Sunlight (Dark Souls) was able to conjure lightning, which he used to peel away the Everlasting Dragon's scales and win the war against them. 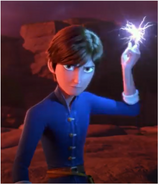 Sorcerers (The Sorcerer's Apprentice) are able to conjure lightning.

Diviners (Wizard 101) are wizards from the School of Storms, with power over lightning magic. 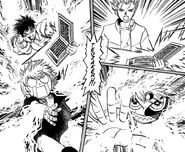 Both Zatch and Zeno (Zatch Bell!) can create different forms their of lightning when their respective partners Kiyo and Dufort read their spells. However, Zeno's lightning is far more powerful than his brother's, and he's able to remain conscious when he attacks.
Português do Brasil
Community content is available under CC-BY-SA unless otherwise noted.
Advertisement