Have a body made up of electricity.

"It was created by a chain reaction that pulled in the bioelectric fields of the men who caused it. It approximates independent thought. Its only impulse is to feed off electrical sources...bio or generated and survive."
― Thaddeus Ross describing Zzzax (Marvel Comics)

The power to transform into or have a physical body made up of pure electrical energy. Technique of Electricity Manipulation. Variation of Energy Physiology. Not to be confused with Electricity Mode.

User is made up of or can transform their body completely into electricity. Users' transformed form is anatomically identical to their normal form, aside of being made of electricity, in which case, it contains all to organs and is somewhat vulnerable to attacks. Alternately, the user can transform into homogeneous matter, without any part of their form being more important than the other.

Nigh Formed Electricity Beings are or can change into mostly physical beings, with the electricity flowing through their being, fortifying their cells, bones and muscles. Their power is mostly focused to their bodies and while they gain some amount of electric energy-attacks, the changes and applications are mostly internal.

Full-Formed Electricity Beings are completely formed of electricity, without anything truly left from their physical form. They gain impressive control over their form and vast capacity to expel electricity in various ways.

Leslie Willis/Livewire (DC Comics) can transform into a electric form.

Skin Bolic (D. Gray Man) has a body of solidified and hardened electricity.

The Goro Goro no Mi (One Piece) is a Logia-type Devil Fruit that allows the user to create, control, and transform into electricity at will, making the user a Lightning Human. It was eaten by God Enel

Mugino Shizuri (A Certain Scientific Railgun) can use her converted electrons to substitute for her lost arm and eye. 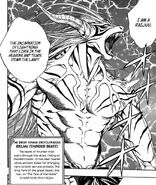 ...and transforms his physical form into intangible electricity in order to teleport via conduits.

Spirit of Thunder (Shaman King) is embodiment of lightning itself. 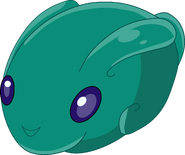 Denshi Bunny (Xiaolin Showdown) can turn the user into electrically.

Spaceman KISS (Scooby Doo and KISS and rock and roll mystery)
Add a photo to this gallery
Retrieved from "https://powerlisting.fandom.com/wiki/Electricity_Mimicry?oldid=1365079"
Community content is available under CC-BY-SA unless otherwise noted.