The ability to manipulate electricity to increase their maneuverability. Sub-power of Electricity Manipulation. Variation of Matter Surfing and Ergokinetic Surfing.

User controls electricity in a way that increases their ability to move and/or maneuver either by granting them abilities they otherwise lack or allowing them to ignore normally needed equipment. 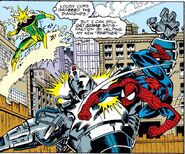 Electro (Marvel Comics)
Add a photo to this gallery
Retrieved from "https://powerlisting.fandom.com/wiki/Electrokinetic_Surfing?oldid=1565281"
Community content is available under CC-BY-SA unless otherwise noted.