Form wings out of electricity.

The user has or can form wings out of electricity and use them from transportation to offensive and defensive purposes such as using them as a shield to block oncoming attacks or slicing/battering the target with electrical energy. 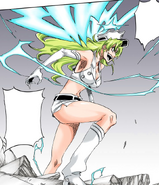 Candice Catnipp (Bleach) using her Quincy: Vollständig to generate six wings of electricity that can be plucked off as swords.

Zapdos (Pokémon) has near infinite amounts of electricity coursing its wings and body, and with each flap creates savage thunderstorms.
Add a photo to this gallery
Retrieved from "https://powerlisting.fandom.com/wiki/Electrokinetic_Wing_Manifestation?oldid=1271226"
Community content is available under CC-BY-SA unless otherwise noted.