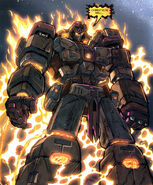 Originally known as Megatronus Prime, The Fallen (Transformers) became a living furnace for the flames of entropy as an eternal mark of his betrayal towards Primus and the other members of the 13 Primes.
Add a photo to this gallery
Retrieved from "https://powerlisting.fandom.com/wiki/Elemental-Mechanical_Physiology?oldid=1478566"
Community content is available under CC-BY-SA unless otherwise noted.