Being the Avatar, Aang (Avatar series) is able to surround his body with all four classical elements: Water, Fire, Earth, and Air.

Surround oneself with the elements.

The power to surround oneself with the elements. Sub-power Energy Manipulation. Technique of Elemental Manipulation. Variation of Aura Generation and Inorganic Aura.

The user can release and surround themselves in/with elemental matter and/or energy for defensive and/or offensive purposes, possibly becoming almost untouchable and granting them various abilities/attacks depending of the element. The auras may also give the user enhanced physical capabilities such as speed, strength and durability.

Yoruichi Shihoin (Bleach) used Shunko to infused herself with a powerful Kido aura of electricity. 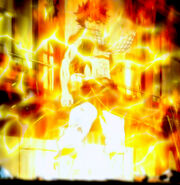 Natsu Dragneel (Fairy Tail) surrounding himself in an aura of fire and electricity.

Geese Howard (KOF) surrounding himself in energy of from the earth.

Vegeta (Dragon Ball Z) showing his blazing aura during his fight against Recoome...

Hot Sreak (DC Comics)
Add a photo to this gallery
Retrieved from "https://powerlisting.fandom.com/wiki/Elemental_Aura?oldid=1444347"
Community content is available under CC-BY-SA unless otherwise noted.