The power to manipulate elemental energy. Combination of Energy Manipulation and Elemental Manipulation.

Users can create, shape and manipulate elemental energy (including elemental phenomena, such as storms and volcanic activity) the force created by the natural elemental forces: usually Air, Earth, Fire and Water, by using their own life force energy, or energy from an external force. Users can only use one as their major power, but may be able to use other elemental energies at a higher level. Some users can use elemental energy for offense, similar to how some beings use their own life energy.

Generally there are several levels of elemental power listed below. The main elements, which are most commonly found in folklore, mythology, and Medieval alchemy. These are based around the five elements of Greek mythology - air, earth, fire, water and aether - and also light and darkness. Electricity is also commonly placed on this level, as many have considered it to be an element in itself or an extension of fire.

Some fictional continuities then have a secondary set of elements, consisting of forces and phenomena more familiar to us in the modern world - anything from gravity and plasma to plants and metal. Electricity, sometimes known as lightning, is often placed here, as is twilight, the combination of light and shadow.

Beyond that are what are commonly referred to as "legendary" elements, the most powerful forces in existence, which usually only the most powerful or worthy beings can control. These are often space, time, life and death, though dark matter has appeared in many works of fiction.

Some continuities believe in different elements to others. For instance, the Ancient Greeks had either four classic elements of fire, water, air and earth or five adding aether. Asian systems use wood, fire, earth, metal and water. But in the BIONICLE series, there are roughly sixteen, including plasma, sonics and gravity.

Definition of an Elemental Force

In ancient times, many civilizations had their own ideas about what the universe was made of. Most famously, the Greek had their four, sometimes five elements - air, fire, earth and water (and aether, the oft-forgotten fifth element).

Since then, scientists have discovered a set of chemical elements, which are what matter is really comprised of, but the idea of elemental forces is still popular in fiction. Over time, new elements such as electricity and life have been added to the list.

As a Toa, Takanuva (BIONICLE) is a master wielder of the elemental energies that come from Light. 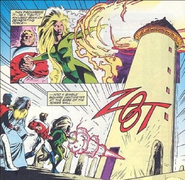 Cornelia Hale (W.I.T.C.H) as the guardian and Mistress of earth, can project beams of earth energy
Add a photo to this gallery
Retrieved from "https://powerlisting.fandom.com/wiki/Elemental_Energy_Manipulation?oldid=1667508"
Community content is available under CC-BY-SA unless otherwise noted.