Superpower Wiki
Register
Don't have an account?
Sign In
Advertisement
in: Powers, Supernatural Powers, Form of magic,
and 4 more

Thrall (World of Warcraft) using his Shamanic powers to manipulate the elements.

"I do not rely on strength alone, Garrosh. My power... is all around you!"
― Thrall (World of Warcraft)

The ability to use the elemental forces through magic. Form of Magic. Variation of Elemental Manipulation.

The user can utilize different elements as a form of magic. They can use different spells to formulate their elemental quantities and energies for many uses.The elements themselves are much stronger than their natural counterparts. As stated above, they possess supernatural properties that grant them special advantages such as surpassing the limitations and weaknesses that their natural opposites may possess.these elements may be link to magical creatures/being or magical force. because of there magical nature these elements can be use for various magical purposes like heal wounds, summon entities, creating a contract, impose/break seals, etc. Advance users can take a step further and create new elements either from scratch or as a working foundation of pre-existing elements.

Mammoth Mogul (Archie's Sonic the Hedgehog) is the inventor of Ixis Magicks, which center on the manipulation of the elemental forces of Mobius: fire, water, air, earth, and Power Rings.

Syaoran Li (Cardcaptor Sakura) can use his enchanted Jufus to summon various elements, including fire, water, wind, lightning and ice.

The elements: metal, wood, water, fire and earth come together. (Magic to Win) 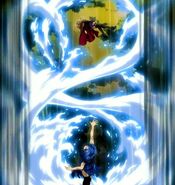 Juvia (Fairy Tail) like many other mages can use elemental magics. In Juvia's case, she uses water.

The Guardians of the Veil (W.I.T.C.H)
Community content is available under CC-BY-SA unless otherwise noted.
Advertisement