"BURN AND DROWN AND CRUSH AND SUFFOCATE!!"
― Cho'gall, World of Warcraft: Cataclysm

The ability to manipulate the elements.

User can create, shape and manipulate the basic elements of nature, the rudimentary, simplest or essential parts/principles of which nature consists. The four principal, basic elements and their states are:

Energy is often considered to be a fifth element, similar to plasma, in some universes. Other energies (such as Magic, or Cosmic Manipulation) may be thought of as elements, but are energy. These are more specific and exotic and thus much rarer powers.

...and while Syn Shenron does not possess any elemental powers in his base form, once he absorbs the other Dragon Balls and becomes Omega Shenron, he gains access to his fellow dragons' elements.
Add a photo to this gallery

Aggregor (Ben 10: Alien Force) in his form after absorbing the abilities of the aliens he captured, giving him the power of elemental manipulation.
Ted.span.jpg
Captain Planet (Captain Planet) has full control over the elements of earth, water, fire, and wind.
Aang Avatar State.png
In his Avatar State, Aang (Avatar: The Last Airbender) uses his complete knowledge of all of the past Avatars before him, giving him total control of the four elements, and thus allowing him the ability to create an elemental field around him.

Being the new Avatar after Aang, Korra (The Last Airbender: The Legend of Korra) can bend all the four basic elements.

The Guardians of the Veil (W.I.T.C.H) can manipulate Water, Fire, Earth, Air and Quintessence respectively.

Diego Forlan (Grachi) is a Kanay so it is able to control the elements,
Add a photo to this gallery 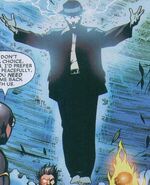 Screen Shot 2013-09-12 at 15.45.06.png
Storm (Marvel Comics) can control the atmospheric elements and intergalactic mediums
Add a photo to this gallery

Elemental Queen (Valkyrie Crusade) can manipulate all the elements.
Add a photo to this gallery
Retrieved from "https://powerlisting.fandom.com/wiki/Elemental_Manipulation?oldid=786940"
Community content is available under CC-BY-SA unless otherwise noted.