The ability to create, summon, generate walls by using the elements. Sub-power of Elemental Constructs. Variation of Wall Generation.

User can create elemental walls from nothing or by shaping the elements, they can shape the wall to any shape they want, but afterwards the walls are unchanging and immobile. Depending on what element the wall is made of, it can posses a variety of abilities and be very effective in both offensive and defensive combat.

Aang (Avatar: The Last Airbender) raising the earth to form a sturdy wall. 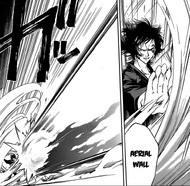 Darui (Naruto) releasing a wave of compact water to form a wall. 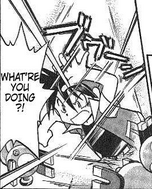 Magneton (Pokemon Adventures) forming an electrical wall that is stronger than steel.

Aoi Kuchiba, in her Yū (The Qwaser of Stigmata) persona, creating a wall of pressurized oxygen.