The power to create creatures or entities that embody a concept, force or idea. Variation of Concept Creation. Not to be confused with Creation Embodiment.

User can create creatures, entities or objects that embody a concept, force or idea, either by creating an entirely new creature or object to embody the desired concept or by transforming a pre-existing object or creature into the desired embodiment. 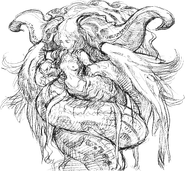 Myria (Breath of Fire) created the embodiment of corruption and deceit Deathevan from a small fragment of her power. 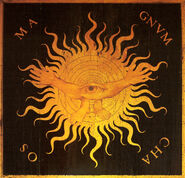 Chaos (Greco-Roman Mythology) was the personification of the formless void where the cosmos sprang from, and the parent of the first primordial gods.

Lord Death/Shinigami-sama (Soul Eater) - as the personification of death and the source of the madness of order - was able to create other entities by splitting his soul, including...

...Kishin Asura, the embodiment of Lord Death's capacity to feel fear and the source of the madness of terror...

...and Death the Kid, his son and successor.

Le Papillon (Grindhouse and Watercolors) created the personification of Death...

...Phantom (Grindhouse and Watercolors), who then created the original primordial gods to organize the universe.