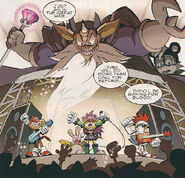 Ixis Naugus (Sonic the Hedgehog) influences the participants of Mina's concert, amplifying any existing fear and hatred of NICOLE.