Dark Cupid (Miraculous: Tales of Ladybug & Cat Noir) is able to use his arrows to turn all love - be it romantic or platonic - into hatred, contempt and bitterness.

"Would you rather be killed by Sarda or by your beloved friends?"
"Neither! Also, I hate you guys."
"Hate is a kind of love."
― Red Mage and Black Mage (8-Bit Theater)

The power to invert the emotions into their polar opposite. Sub-power of Emotion Manipulation. Variation of Emotion Inducement.

The user can invert the emotions of others into their polar opposite, turning love into hate, courage into fear, despair into hope, etc. and vice versa. 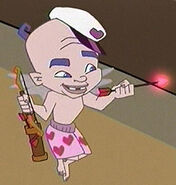 While normally used to induce love, Cupid's arrows (American Dragon: Jake Long) are able to induce hatred for those that they already love when mishandled.

HIM (The Powerpuff Girls) was able to turn all of the love the people of Townsville have for the Powerpuff girls into hate.
Add a photo to this gallery
Retrieved from "https://powerlisting.fandom.com/wiki/Emotion_Inversion?oldid=1526041"
Community content is available under CC-BY-SA unless otherwise noted.